Movin' West RV Park began life in 1969 as Movin' West Trailer Ranch. The first owners and builders of the park were Bob and Jeannie Britton.  They started by building a mobile home park that slowly over the next twenty years became the RV park you see here today.

All of the mobile homes you see in the park today are summer homes.  Only a caretaker lives here year around. The rv sites in the park are placed in such a way as not to disrupt the natural look and feel of the forest.  This park has hundreds of trees.  They are a great pain in the spring when it is time to clean up all the needles that have fallen over the winter.  They are a wonderful asset as you sit under them on a greaeagle family vacation.  The shade they provide, the smell of pines wafting on the breeze, all things that add to the beauty of this RV park.

Now a bit more history.  On the fourth of July weekend, not usually the fourth of July, but the weekend before or after, Graeagle puts on a three day Fourth of July Celebration.  The parade that happens on Sunday afternoon was started by Jeannie Britton.  In 1969 wanting to do something to celebrate the fourth she had all the kids in the park decorate their bikes.  They rode around and around the roads in the park.  The next year she had too many decorated bikes so she made the decision to ride down the street in front of the park to the Millpond and back with the Kids.  The town saw this small parade of bicycles and decided to put on a full blown parade. 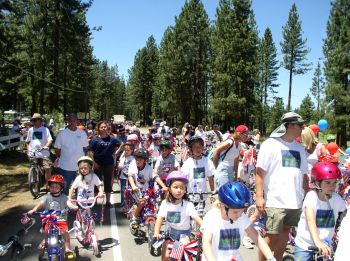 The parade has now been going for more than 40 years.  The Movin' West Bicycle Brigade has joined the parade for over 40 years as it passes the entrance of the park.  The brigade has from 40 to over a 100 participants in any given year.  Children from all over the area come to the park with their bicycles decorated and experince the fun of being in the Mohawk Valley fourth of July parade.

As you enter the park there is a stage coach replica that sits by the entrance.  It is a reminder of days gone by. Maybe as much as 20 years ago it would be hitched to a team of horses, and it too would take a spin down the parade route.  Ladies that lived in the mobiles at that time would dress up and ride in the coach.  After the parade ended at the millpond, they would take the old highway into Blairsden.  While making this loop they would stop at each tavern along the way and celebrate the fourth with a drink.  The lady telling about this escapade said they were very Happy by the time they arrived back at the park.

There is an old single horse drawn wagon off to the left of the entrance of the park.  This wagon also has historic significance.  It is owned by the Graeagle Land and Water Company.  The owners of the town of Graeagle.  This wagon was used to collect the garbage in the town of Graeagle.  As you go around the park you will see many old items that the original owners collected over the years.  Look for mining equipment, an old ox bow, a chinese pack saddle, and many more items from the area that have historic significance.

We welcome you to come and enjoy this little piece of heaven.  It is our pleasure to share our home with you.

Photos below will link you to Pages with information about Movin' West RV Park. There are links at the bottom of this page For additional information. 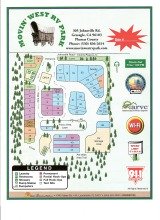 Give us a review of your stay in Graeagle. What is your favorite thing to do here with your family? How was your visit at the RV Park? Have your own page on the web. 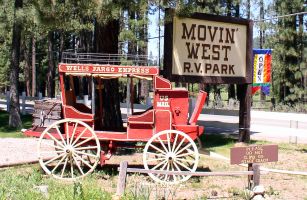